My first sponsored race ever! Not due to athletic performance, but instead, in exchange for a pre-race write-up and a post-race review. No complaints from me and many thanks for JustRunLah! for informing me about this opportunity :)

As this was my first multisport race, I was feeling pretty excited. The aim was to soak in the experience (figuratively... and literally). In addition, having glanced at the previous year's results, I felt that a top-10 finish in the category (Sprint, M20-39) was reasonable, though not a goal.

The night before, I hurriedly glanced through resources I could find pertaining to an aquathlon. I never bothered attempting to rehearse a transition (or an open water swim). I didn't even know what the transition area would look like! There was a pretty useful article on JustRunLah! and I was certainly thankful for that!

Come race day, I made my way to East Coast Park about an hour before flag-off. I spent some time watching earlier categories being flagged-off, prepared my transition area (and mentally went through the motions), deposited my bag and received my body marking. Thereafter, a quick stop to the restroom before attempting a short warm-up swim.

A few minutes before the scheduled flag-off, we entered the starting pen. I wasn't planning to be right near the front of the line (though towards the right end; the race was a counter-clockwise swim), though since no one else filled the area, I obliged. Promptly at 9.10am, my category was flagged off.

The first 30m was a mass (or mess) of flailing bodies. I deliberately wanted to experience such a start, having heard about such chaos being expected. Gradually, we strung out and then began the steady swim away from shore. I had no difficulty sighting, though I found myself constantly drifting to the right (recall that the course was counter-clockwise), possibly due to the current (or my inexperience). In addition, my wrist tag (for entry into the transition area) came loose. I definitely couldn't be swimming while trying to grasp onto it, therefore I stuffed it into my tights (thanks Bryan...and more on it later).

By the time I hit the major right turn however, I was immediately beside the buoy. It was a relatively uneventful swim back, apart from one occasion where I decided to swim blindly and I veered off course a little. Thankfully, a kayak reminded me to keep to my left in order to return on course. The swim was completed in slightly past 17mins. My target was 20mins for the swim and transition - and given my poor adherance to the tangents, I thought that was quite decent!

Transition was awfully slow, though I wasn't in much of a hurry. A volunteer informed me that I was in 16th and I knew that I would catch a handful along the run, it being my primary discipline. At the transition, I dried my feet, drank a sip of water, started my Garmin FR15, put on socks and double knotted the laces on my shoes, put on my HRM (chest strap), grabbed my singlet (with the race bib attached) and began the run out of the transition area.

I had trouble getting my shirt on, event as I was running. Despite choosing a relatively loose shirt, it certainly wasn't easy getting it on. To complicate matters, my HRM was constantly slipping down towards my belly. I also found out that I accidentally paused my Garmin. When I finally resumed the Garmin, got my HRM strap back up (only for it to slip down again) and wore my singlet, I found the race bib flapping violently - the right side of the bib was not attached! The bottom right pin was nowhere to be found, while the top right pin was still attached to the bib. In the midst of the run (and my falling HRM strap), I miraculously managed to pin up the top right corner of my bib and then began my quest to overtake as many as I could. I was feeling a sharp sensation along my tights as I ran, yet I was clueless as to what it was (and it isn't the easiest thing to adjust while running). With some modification, I tried my best to resolve the discomfort.

The run was relatively uneventful. I probably started a little faster than I wanted, having previously intended to run a strong negative split (instead of a minor one). I passed the distance markers constantly ahead of the beep of my Garmin, though that was probably due to me accidentally pausing my Garmin at the start of the run. Nonetheless, by the time I crossed the finish (with much overtaking going on), I was sure that the course was slightly (200m?) short (or else I'd have PB-ed in a 5km, while participating in a Sprint Aquathlon). My Strava data for the run is available here.

Oh, one interesting aspect was that the tape was held up for me at the Finish. I was pretty curious and wondered whether they did that to all participants (I noticed the runner in front getting the tape as well), as I was absolutely certain I wasn't anywhere near the Top 3 in my category. Thereafter, the medal was placed around my neck as the timing chip (which they constantly stressed to return!) was detached from my freshly bleeding ankle (sand abrasion). Thereafter, I also found out the sharp object in my tights was actually my wrist tag. 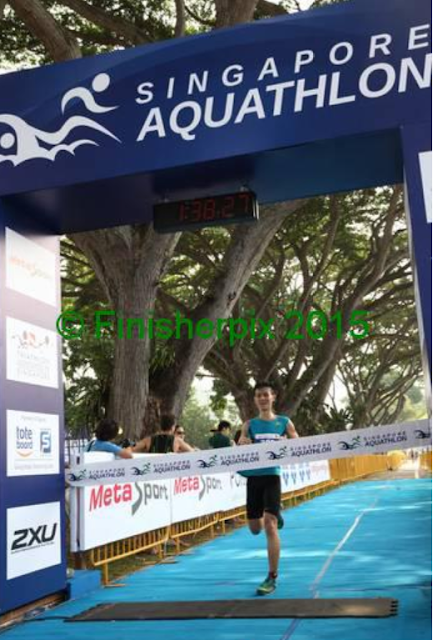 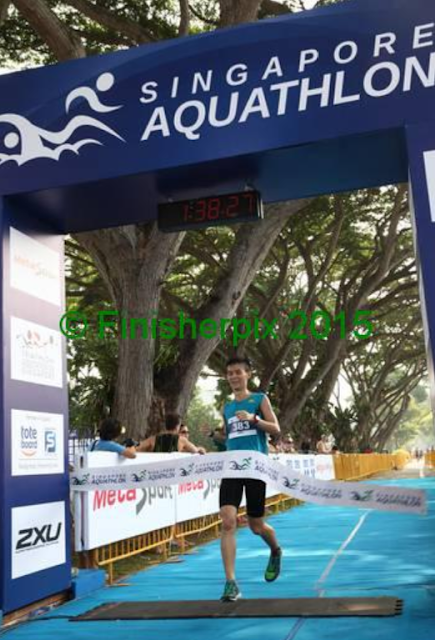