I was running out of time.

I had registered for this race uncertain if I was to be representing NTU for SUniG the subsequent Saturday. It was a little heartbreaking to miss the Early Bird rate (I was just a day late!) of $24, but even the normal rate was priced very modestly. No hesitations to run this small race and support the CSC, perhaps even snatch a podium finish.

The plan was to eye the competition, stratify my standard and importantly, practice racing. By then, I had known next Saturday would be a major race, hence this race had to be taken gently. My ideal race would constitute starting with the leaders (if and only if they didn't go out too quick), sit and sit and kick towards the end. Kicking wasn't exactly my strength, unless it was a slow race (Strava data of one of my favourite finishes when I slowed down in the middle portions of a race to spur on the female leader till the last 300).

As I arrived at the race venue early (just in time to see the HM runners get flagged off), I looked around and saw two very realistic podium finishers. One was Kien Mau - I certainly am not capable to be contending with such a standard right now. The other was Prasant, a sub-40 10k runner that I've seen running before donning the F1 colours. Interestingly, as with most F1 runners - they start off really quickly. However, I felt that if I could keep him in my sights, I quite definitely would catch him. Yet all these thoughts were hypothetical. The race would soon begin.

Just a few minutes before the flag-off however, a tall (really tall) Caucasian wearing green strode over. Now that seemed to be adding some competition here. We were then flagged off promptly at 7.00am.

I knew I wasn't going to stick with the leaders once they started. One barefoot runner went off to a flying start, probably leading for the first 200m before Kien Mau overtook him. I made a mental note that there were 9 other runners ahead of me - I was aiming for a top-3 finish (realistically 3rd, as Green seemed to have found his way into second).

The initial portions of the route were undulating and winding as it took us through Sengkang Riverside Park. I went easy on the uphills and kept relaxed on the downhills. The gap was growing between the top few and myself, but I had absolutely certainty I would catch up with some. However, the question was, how many exactly.

As we approached the bridge along Sengkang East Way, a runner ahead started brushing his hair very violently. What was happening? I heard it, the buzz. Flies? Felt it on my neck and I (very gently) dusted it. Thankfully it didn't return. The runner ahead however, was still in evident discomfort and agitation. Seems like he even caught up with two others ahead of him in the process.

I played the game of catch-up. Within the span of the first three km, I had overtaken 6 of the 9 runners ahead. This left me in 4th place. Just one more to go. However, the gap between me and Prasant was huge. I had some time though. I thought so.


The miles passed and hmm... the gap didn't seem to be decreasing. I had two choices. Bearing in mind that this race was just a week before SUniG, I wasn't prepared to run it too hard (anyway that wasn't going to be easy when I was isolated for about 70% of the race). Therefore, it was a choice between catching up or maintaining my pace (a decent pace, not redlining). I needed some serious motivation if I was to attempt the catch-up - cos 35-40 seconds of a gap wasn't encouraging. At all. I recall making a wish that the race was 15k instead of just 10. I was absolutely certain I would catch him if my wishful thinking came true.

It was towards the the 8km mark, with my existing awareness that this course was going to be short (making catching up even tougher), that I found myself clawing towards Prasant. Noticeably. The gap had shrunk to 30...25...20. It was actually within reach. I knew I wouldn't have to hurt too much if I sped up for this last 1-2km and therefore I found my second wind.

The 20 second gap appeared to be obliterated in... two minutes (ironically)? I knew the race was in my hands as Prasant beckoned me past when I appeared alongside. I played a little additional surge to confirm my dominance. Then I settled (as this race wasn't about the time - it was about a race), preparing to respond if I had to (though I highly doubted it).

It was barely a few hundred metres before the end was in sight. Had I left my surge any bit later, I may have had to contend with a more motivated challenger. It was a pretty big gap now, despite passing only a few hundred metres ago. I negotiated the abrupt left turn and steps and passed the finish. In second.

Where did Green go? Kien Mau and Green were dominant from the start. I knew I couldn't have passed Green. Prasant finished in third, ascertaining that I didn't mishear the claim of the volunteers. I suspected that Green had run off course. That was definitely a realistic possibility and I certainly paid careful attention not to be a victim of misdirection.

I was blessed. It was a pity for Green, who would certainly have come in second (Prasant informed me he saw him a few hundred metres ahead with quite a few km to go). The satisfaction of a well-timed surge that threw me ahead of Prasant was also immense, particularly after realising that the 9th km was covered in 3:41 (Garmin). Coach's intervals seemed to be working for me.

I praised, acknowledging that just a few months ago, I was handicapped with injury. God knows when I would next succumb, but I'm treasuring this opportunity He gave me to participate and enjoy the freedom and exhilaration of running. Not just running, but I'd consider it racing.

- update -
Two weeks after the race I received this in my mail! A simple gesture (an engraved medal and a laminated certificate - albeit a misprinted position of '1st Runner') but the attempt is encouraging. Thank you organisers :) 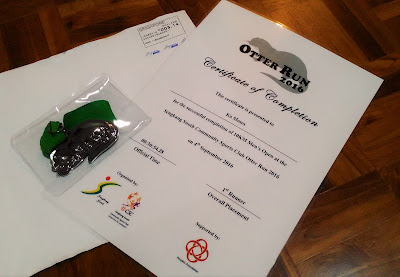