"Hi Doctor, I'm one of the students from LKC," I remarked to Dr Jason - while seated in the medical tent.

Just minutes earlier, I was ushered into the tent - on a wheelchair - after I finished my race. At that point, I was dizzy - the world wasn't spinning or anything - I was just dizzy. The medics, noticing me at the finish line, insisted that I head into the tent. En route, I passed Ivan from AC.

The tent was surprisingly empty when I entered. It seems like I may have been the first visitor that fateful day. The volunteers brought me to a stretcher, where they requested that I lie down (although I didn't think I needed to) and there they took my vital signs.

"That's quite low, take again," a lady indicated upon seeing my heart rate (120-odd) on the pulse oximeter. Even I was surprised that my pulse was this low just minutes after completing the distance. A check on my temperature reflected 38.3 C.

Noticing that I quickly felt better, though remained dizzy, the medics directed me to a sitting area, where I met my first other companion (non-medic) as he was directed into the tent and got seated beside me. A man in his 20s was experiencing pain in his right foot, after developing plantar fasciitis a week earlier and running through it. We introduced ourselves while chatting, with the medics checking on us every once in a while. During this period, I saw numerous other runners being brought in via different modes. Some could walk, others were in wheelchairs while one was on a stretcher.

After spending about 20 minutes in the tent - which was getting increasingly crowded - the medics checked on me and told me I probably could leave since I was feeling better. I bid my farewell to Nicholas (my companion) and ambled around the race site.

Slightly past an hour ago, I witnessed the entry of Haile Gebrselassie at the front of the race pen, alongside a corporate group (Standard Chartered employees I presume) who had priority entry in front of the rest of the runners. This was a exhilarating moment (though downplayed by my anxiousness) as I got to see the double Olympic gold medallist at the 10km - not forgetting to mention the 27 world records he set. This friendly personality was more than willing to take selfies with the various runners in the priority entry while the remaining of us looked on enviously. Shortly after, we were flagged off at 7.15am.

Assisted by the downhill and adrenaline, I passed the 1km marker in a shocking 3:30+. Having scrutinised an online plot of the course, I knew that the marker appeared slightly earlier than it should have, with my estimate of the first km being close to 3:45. I suspect that in my eager anticipation, I had the potential to ruin my entire race. I forced myself to settle into a slower pace, hoping that I had not already ruined my chances of the sub-40.

Before approaching the 2km marker, I grabbed a cup of chilled 100-PLUS. The 2km point was passed in a much more realistic 7:47 and this time the marker was approximately where I had expected. I continued uneventfully, passing 3km in about 11:48. It seemed to me that if I could hold this pace, I would just sneak under 40. However, I wasn't exactly confident of this when I passed 4km in 15:50 while starting to feel the fatigue. Meanwhile, I had noticed Haile and 2 other Kenyans


I have to commend the organisers (Spectrum Worldwide) for the smooth U-turns. The U-turn at the end of Nicoll Highway (slightly before 5km) was gradual - contrary to the hairpin turn (as with most other races) that I was expecting and actually practised making. Subsequently, I passed the 5km marker and caught on to a slowing Randall, suggesting that we stick together. Possibly energised by my company, we maintained the pace before he eventually sped up. (He went on to finish very strongly).

Though I don't remember the time I passed the 5km or 6km markers, I know it was at this point that it dawned on me, based on the splits, that I may not break 40. I had such a strong desire to slow marginally, yet I constantly reminded myself of the commitment I made that I would do my best whether or not I felt I could achieve my goal. I pressed on.

In a moment of surprise, I passed the 7km marker in 27:22. Somewhere between 5-7km some distances markers had to be slightly inaccurate. This rekindled my hopes of the sub-40, though I hoped that the 7km marker was not the inaccurate marker (and placed earlier than the actual 7km mark).


I hardly remember much thereafter. I remember my name being announced as I passed a cheer station. I remember grabbing 100-PLUS and drinking some while dumping the rest on my head. I remember cheering on Dr Mok Ying Ren as he casually overtook me as the race routes combined. I remember seeing a sign indicating 300m was left and knowing that I had the chance of the sub-40 as long as I held the pace. And I remember seeing the clock tick 38+ as I entered the final straight, and it was then that I knew that the sub-40 was secured.

Looking back over the past year, I have run seven 10km races. The first (being 2XU) and the last were certainly run the hardest. They have certainly been satisfying. I never suspected I'll train hard enough to break, but I have finally broken 40. Likewise, two years ago during SCMS 2012, I broke the 4-hour mark, running 3:57:05. 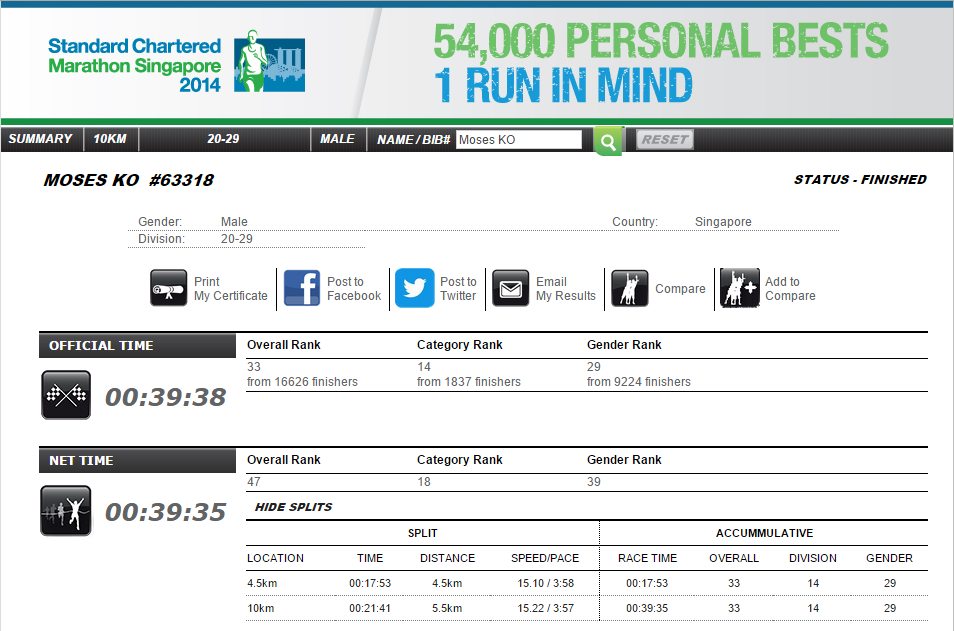 The Standard Chartered Marathon Singapore seems to be the event where I challenge, and have fulfilled, my running goals. Yet, in both instances, I wear the Sundown Marathon 2012 race top, serving as a reminder of how I was introduced into running events in Singapore. That impulsive, rash and fearless decision of mine to run the full marathon and the completion of it in an unsatisfying time was what gave me the inspiration to start training. And when training paid off, it was indicative that in life, with discipline and diligence, some previously unconsidered things are possible. All this however, stems from provision - of time, of opportunities, of people, of life - by my Lord Jesus Christ.
Posted by Moses at 4:24 PM