A free race bib was available, albeit one of the opposite gender. Nonetheless, I didn't hesitate to contact the donor :)

I was half prepared to run half (or thereabout) of the half marathon during this race, held on 2nd August 2015 (after being postponed from March). A couple of friends, known and unknown to me, were participating in the half marathon category. Furthermore, having taken a pretty long break from running, by my standards at least, I knew I would love to get back and join the local running community. From the race guide, I knew that the route would take runners along lots of public spaces - such as East Coast Park and Gardens By The Bay. Therefore, there wouldn't be anything incorrect about "crashing" the race if it was after all, public space, hmm..?

Thus, an actual race slot would allow me the legitimate right to "occupy" the race. Well, disregarding the fact that it was another runner's...though since she wasn't there there was additional "running space" that would have originally been occupied by her. I understand that not everyone may agree with the ethics of this action but may we agree to disagree.

However, having just been informed of this slot a day earlier, there was some preparation that needed to be done. First, I needed to figure how I wanted to run this, now that I was to actually complete the full half (now that sounds funny). Having returned to running barely a weeks prior, I was obviously in no state to race this (and doing so would probably cause me to contend with the female podium finishers - unnecessary attention). Eventually the plan was to run with Andrew (aiming 1:45) for the first 10-12km, before stopping to wait for Jacq + Joseph to run alongside them for the remainder of the race. Well, the former didn't happen and the latter only happened in part.

I was fortunate enough to be given a lift by Jacq's dad, though that was pretty early, at about 3.05am. Though I had went to bed at about 9.15pm the night before, I probably only managed a few hours of sleep. We eventually reached Nicoll Highway around 3.25am, before proceeding to jog over to The Float at Marina Bay. By the time we reached around 3.40am, there was a long snaking queue for the shuttle buses to GBTB. It was only at around 4.15am that we boarded the buses, and we alighted just minutes before 4.30am. I knew I wasn't going to get flagged off in the first wave. This meant the likelihood of not being able to run with Andrew (or so I thought), hence shattering the first half of plan for the half. 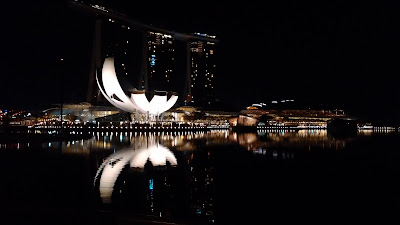 I entered the race pen about a minute after 4.30am. By then, I had already heard the first wave being flagged off. There seemed to be two more waves ahead of me. Wave 2 started at about 4.40am. I was prepared to be in Wave 4 (flagging off possibly at 5am?), but surprisingly, they allowed us to enter the back of Wave 3. I inched my way towards the front, hoping to miraculously get a decent starting position and perhaps even find Andrew (whom I presumed had already been flagged off) along the way. If I failed to find him, I was still planning to get a decent steady-state workout for about 10km.

At 4.50am, my wave was flagged off. The initial few minutes involved plenty of weaving, but the crowd strung out quickly and I found myself inching towards the leaders of my wave. Understandably, the leaders in my wave weren't moving that quickly. I was pretty surprised with a 4:30 first km split as that was certainly faster than what I was expecting. Though it felt pretty comfortable, I recognised that the first km in every race was always deceptive, hence I eased off a little.

The next few km passed pretty uneventfully. Having decided to run with my phone (the first race ever run with a phone!), I attempted capturing anything of mild interest though unfortunately, under the cover of darkness, nothing really showed up clearly. Most of the first half was run between 4:20-4:40 despite the moments of dead stops in order to try my luck with night photography without a flash. It wasn't long before I was heading towards the U-turn point, slightly past the 9km mark.


Due to my inconsistent pace as a result of the crowds and photography, the increase in effort was perceivable after about 7km. Nonetheless, this was still well within my comfort zone and had I wished, I probably could manage at least 15km holding the pace. This was a major encouragement because just days before, I found it challenging completing just 3-5km anywhere close to 5mins/km. After 10km, I eased off as my intended workout was completed.

Along the way to my designated meeting point with Jacq, I did find a runner who I offered to run with and he seemed pretty thankful for the company. Barely accompanied him for 2km before we arrived at the hydration station that I agreed to meet Jacq at, hence I bade him farewell. Thereafter, it was some waiting and walking/jogging back to the U-turn in search of Jacq. Depreciation of my muscular fitness was pretty evident as I could sense potential cramps when I tried to bend over or stopped walking. While waiting, Kelvin from Delta/my fellow disruptee shouted out as he passed me.

Eventually, we caught sight of each other and it then was a challenging remaining 10km back to the finish. Nothing too eventful and we managed to get onto Fort Road just after 7.00am. Thankfully we weren't diverted.

I must admit, though this run wasn't aerobically challenging, the sheer duration (nearly 3 hours of the race) of keeping on my feet was pretty exhausting. I certainly was thankful for the privilege of running this race. It's a pleasant twist to get to experience what it feels like to run in the middle of the pack as it does require mental fortitude. Therefore, kudos to all the runners who try their best even if you take some time - because every additional minute out there is one more minute of hard work compared to the faster few. 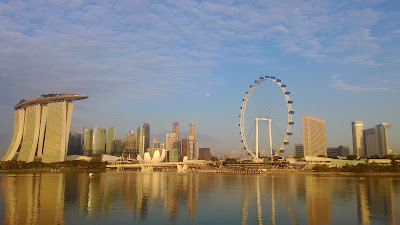 After the race, we collected our entitlements (I was rather embarrassed to be collecting a female Finisher Tee) and a bunch of freebies. Met Kenn Siang from Delta and Joseph as well. Pity I didn't get to find Wilson. I later found out that Andrew had also started in my wave and hence we actually could have run together.

Well this was a half of two halves. I'm now hoping to get back to some adaptable training over the next few months!

Oh yes, not forgetting the results (released 2 days after the race!).